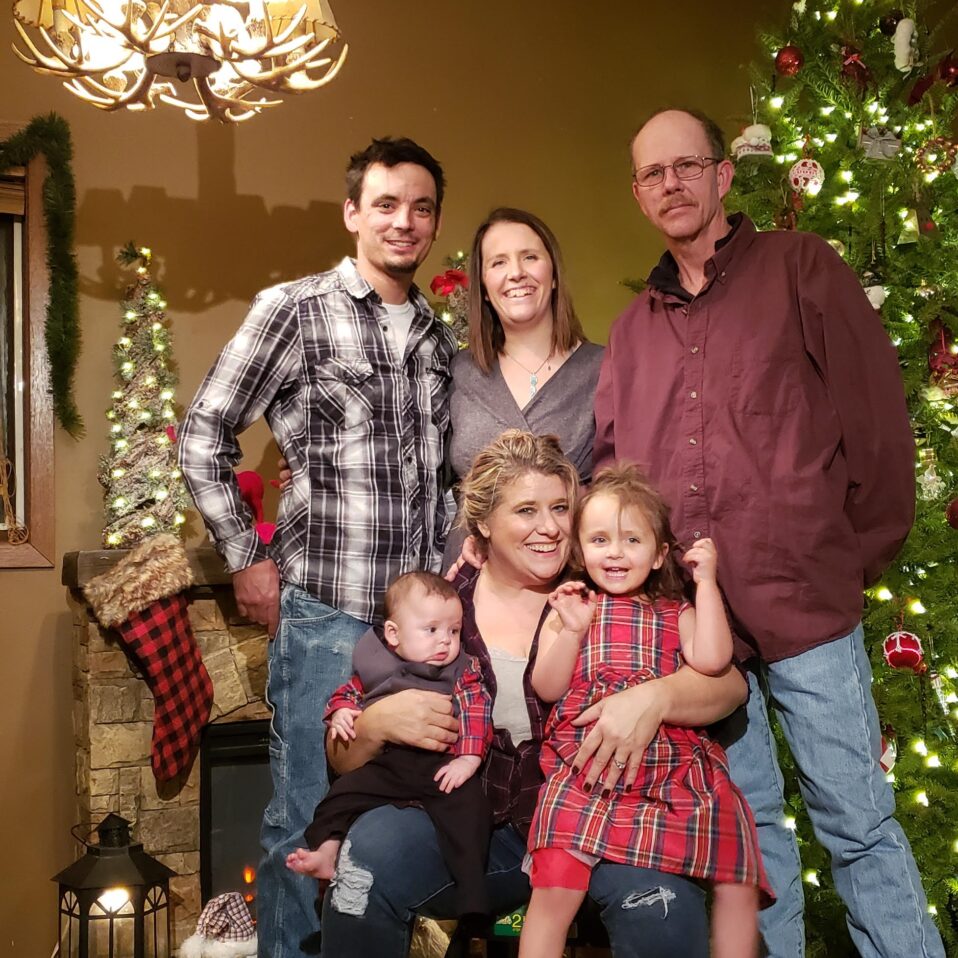 SEPTEMBER 06, 2022, SALT LAKE CITY – On May 16, 2008, Michael W. Thompson was sentenced to two concurrent terms of not less than five years to life in prison after being convicted by a Salt Lake County Jury of two counts of Forcible Sodomy. His convictions were reversed in January 2014, and the State did not pursue a new trial against him and dismissed his charges in April 2014, after Mr. Thompson served nearly seven years in prison.

The Rocky Mountain Innocence Center (RMIC), along with Professor Jensie L. Anderson, who also co-founded RMIC, began investigating Mr. Thompson’s claim of innocence in 2015. Parr Brown Gee & Loveless joined RMIC and Professor Anderson in litigating the case, and a Petition for Determination of Factual Innocence was filed in March 2017. The petition pointed to newly discovered evidence that, when viewed with all the other evidence, would ultimately prove Mr. Thompson’s innocence, including findings that the testimony of a State’s expert witness was based on faulty and inaccurate software reports and calculations that would have made Mr. Thompson’s presence in the state to commit the alleged acts impossible.

On August 30, 2022, the Honorable Judge Su J. Chon signed a memorandum decision granting Mr. Thompson’s Petition for Factual Innocence and awarding him nearly $300,000 for the seven years he was incarcerated, in accordance with Utah statutory law. Judge Chon also denied the State’s motion alleging that Mr. Thompson, along with his wife, destroyed evidence in the case.

The Rocky Mountain Innocence Center works to correct and prevent the wrongful conviction of innocent people in Utah, Nevada, and Wyoming. RMIC advocates for systemic reform to improve the justice system and to create meaningful opportunities for the wrongfully convicted to prove their innocence and to receive compensation for unjust incarceration. For more information go to www.rminnocence.org, call (801)355-1888, or email RMIC Executive Director, Kristy Columbia, at kcolumbia@rminnocence.org.

Professor Jensie L. Anderson teaches legal methods, innocence investigation and post-conviction process, criminal process, lawyering skills, and introduction to law at the S.J. Quinney College of Law, University of Utah, which she joined in 1999. She also served as President of the Rocky Mountain Innocence Center from 2001 until 2011 and as its co-founder and Pro Bono Legal Director from 1999 until 2022. She was awarded Woman Lawyer of the Year in 2014.

The award-winning Salt Lake City office of Parr Brown Gee & Loveless employs numerous talented litigators and business attorneys. The firm provides broad and comprehensive legal services to corporate and individual clients in areas such as commercial litigation, bankruptcy, employment law, and real estate law, and they have been recognized statewide and nationally for their services. For more information, visit www.parrbrown.com. 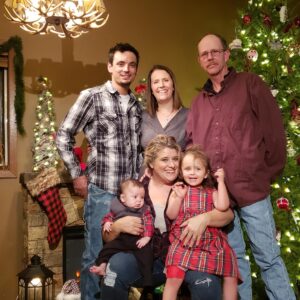 “This is an amazing feeling. After 20 years, our family is finally free from this nightmare. They say the wheels of justice are slow, and that is the truth, but thank the Lord above. We had some amazing people in our corner to help us fight this injustice to the end. We can’t say ‘Thank You’ enough to all of our family and friends that fought alongside of us. Thank you to: the Rocky Mountain Innocence Center – they are truly there to help right the wrongs of those that have been wrongfully convicted; the amazing dedication from everyone at Parr Brown Gee & Loveless attorneys for all the hours of selfless dedication to our family to make sure Michael’s name was cleared is beyond amazing; Jensie Anderson, you have been through it all with us. You are a gift sent from the heavens to us!

All we can say is … anyone that has been wrongfully convicted of a crime: Never give up. Yes, it may take a lot longer than it should, but it is the most amazing feeling when it is done. Never give up on yourself or each other.” – From The Thompson Family – Mike, Darci, and Star 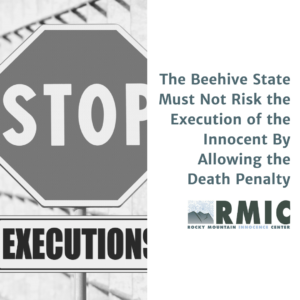 There are situations where convictions are overturned, and nobody should ever be wrongfully imprisoned. Recently, an article was featured in Desert News. Written by Jensie Anderson, the legal director of the Rocky Mountain Innocence Project (RMIC), the article shines a light on the dangers of wrongful convictions. According to the article, “2,872 imprisoned men and women have been proven innocent nationwide. One hundred eighty-six of the people exonerated had been sentenced to death.”

Many people believe that this is a problem of the past, thinking that DNA is the answer to all crimes; however, it is only available in fewer than 10 percent of all cases. Therefore, DNA alone cannot determine someone’s guilt or innocence, particularly when it is not always available.

While nobody on death row in Utah has been proven innocent after being executed, this might happen in the future. For this reason, it might be time to get rid of the death penalty before this tragedy takes place.

Check out the full article by Jensie Anderson on Desert News, and consider supporting the cause by donating to the Rocky Mountain Innocence Project.

October 2, 2021 is the Eighth Annual International Wrongful Conviction Day, a day to raise awareness about the causes and remedies of wrongful conviction and to recognize the tremendous personal, social, and emotional costs of wrongful conviction for directly impacted people and their families. It began in 2013 as an initiative of the Innocence Network, a coalition of 68 organizations around the world dedicated to providing pro-bono legal and investigative services to individuals seeking to prove innocence of crimes for which they have been convicted; working to redress the causes of wrongful convictions; and supporting the exonerated after they are freed.

This Wrongful Conviction Day, we consider the many fights that are ongoing despite the many victories that we celebrate. More than 2,800 people have been exonerated in the US since 1989, but the fight continues for the thousands who remain wrongfully incarcerated. It takes years and, in many cases, decades to achieve an exoneration. Here at the Rocky Mountain Innocence Center, we have exonerated 7 people and we are currently working with 60 clients in Utah, Nevada, and Wyoming. These wins are especially meaningful knowing how difficult the fight for freedom is, but we must remember that our fight continues on behalf of our clients who are still inside.

The long term impact of a wrongful conviction

The fight also continues for freed and exonerated people who face new battles upon their release. For many, getting out of prison is only the beginning. Among other things, freed clients face challenges securing housing and employment, building economic security, and reestablishing relationships. They also face the stigma of incarceration and mental and physical health impacts sustained from living in carceral settings. Reentering society can be a long-term process, and there is no perfect template. On Wrongful Conviction Day, it is vital that we acknowledge this fight too.

Lastly, the fight continues for all of us who work to prevent the multitude of injustices that lead to wrongful convictions in the first place. We have seen considerable progress in the last year. Although RMIC’s primary mission is to bring the innocent home from prison, we are also deeply involved in educating policymakers on criminal justice reform. Read more about our accomplishments here. Yet, there is so much more work to do.

We are grateful for your support and honored to fight alongside you.

In honor of Wrongful Conviction Day, all donations to RMIC will be matched up to $100,000, thanks to the generosity of the Florence J Gillmor Foundation. 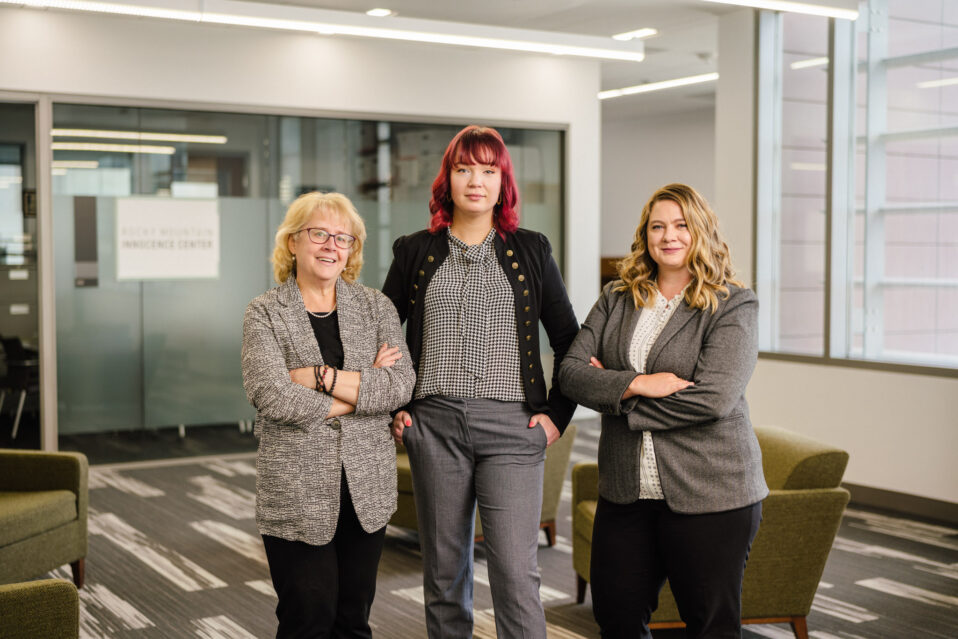 Join Us to Celebrate Innocence Work!

Please join us for a celebration of the 21st Anniversary of Rocky Mountain Innocence Center!

Attendance is complimentary. Your donations will be greatly appreciated. Seating is limited.

Please RSVP at contact@rminnocence.org with your name(s), email address(es) and number of guests. 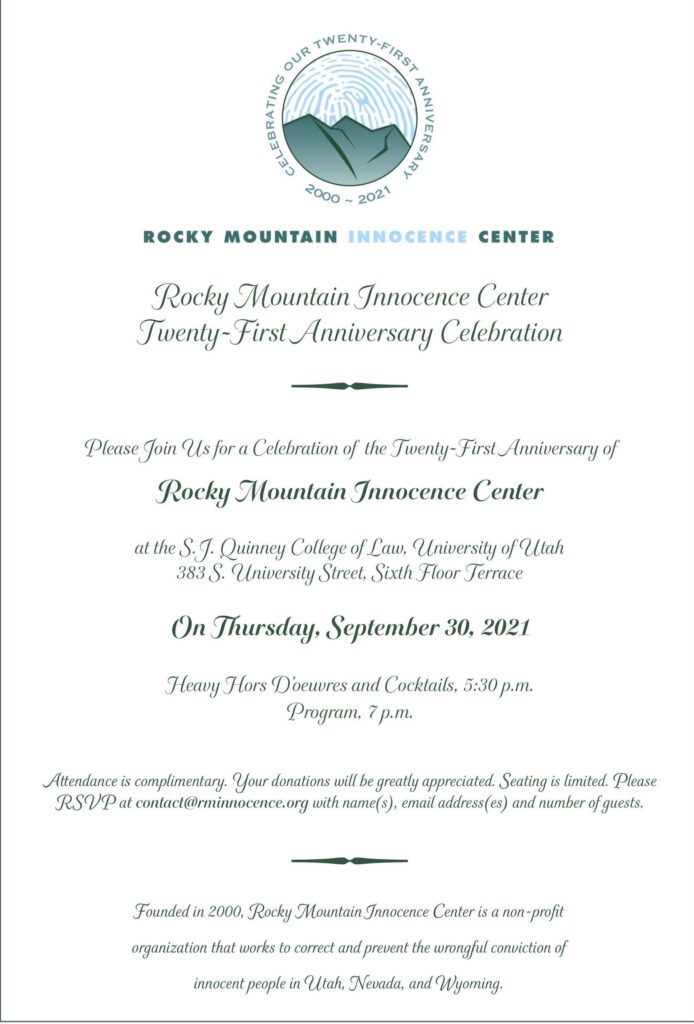 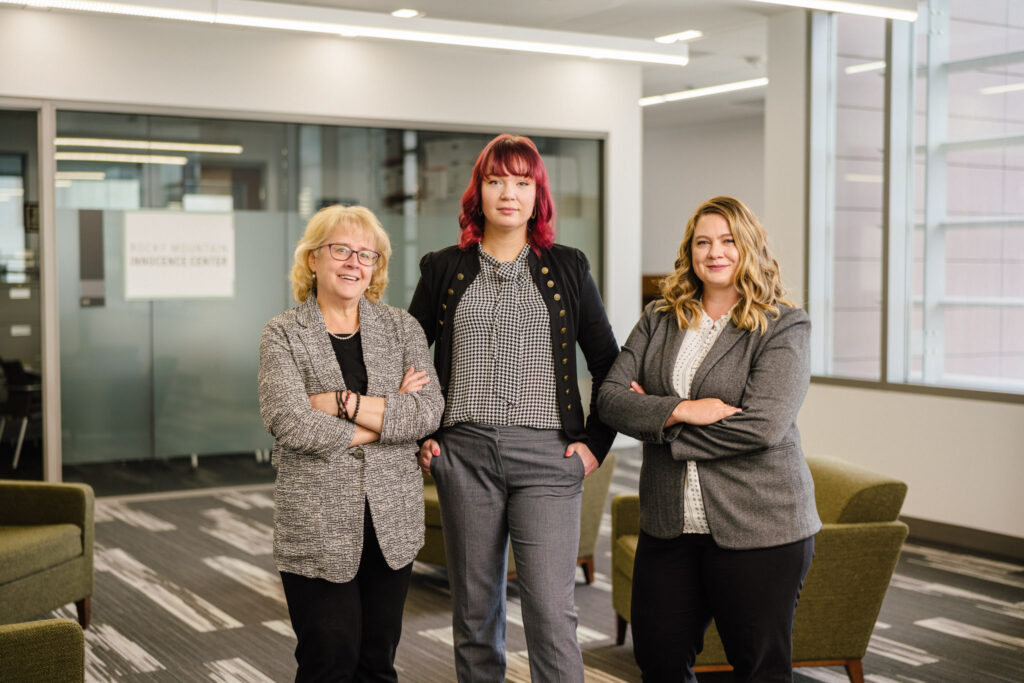 Donate to our 2021 campaign: RMIC 2021 Virtual Fundraiser – hope for the Innocent

Only a few Utah counties have set up review boards to help free the wrongfully convicted, Michael Locklear of KUTV reports. As featured on KJZZ.com, Tuesday, August 26: This article includes:

Jensie Anderson, legal director for the Center, said Utah is “a little behind the curve.” She said her nonprofit is willing to help smaller counties establish units.

“I think all of the counties ultimately should probably have one,” she said.

The first convictions to be overturned through this relatively new process are in the works, announced Tuesday by Salt Lake County District Attorney Sim Gill.

Read the rest of the article here: https://kjzz.com/news/local/only-a-few-utah-counties-have-set-up-review-boards-to-help-free-the-wrongfully-convicted 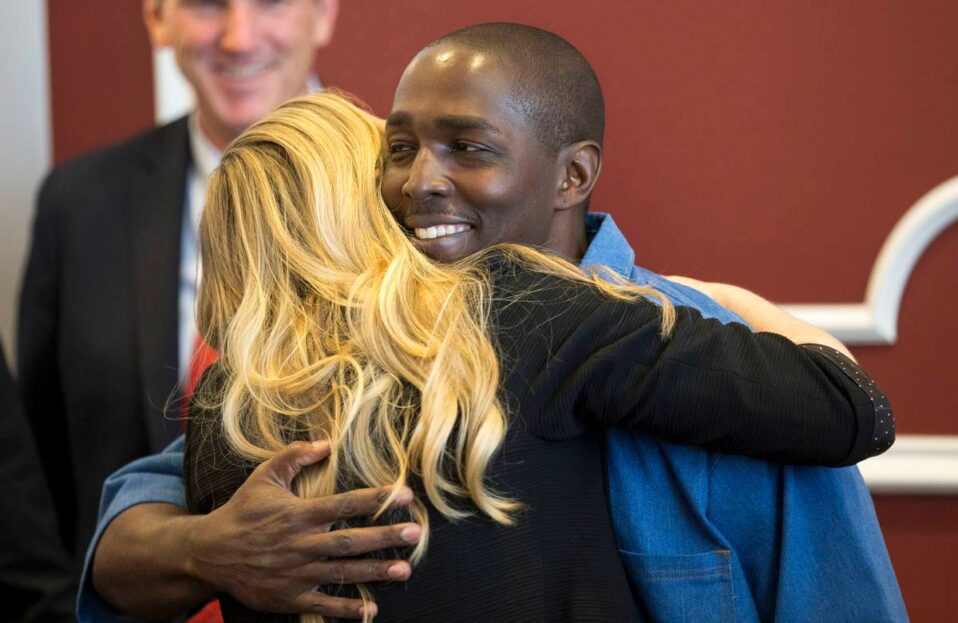 Beyond thrilled to share this great news: DeMarlo Berry was awarded $14.5M payout last week as a results of his wrongful conviction of which he served over 22 years. DeMarlo was sentenced to life in prison plus a consecutive 25 years in 1995. The conviction was vacated after Berry secured assistance years earlier from the Rocky Mountain Innocence Center and following a reopened investigation by the district attorney’s newly formed conviction review unit. 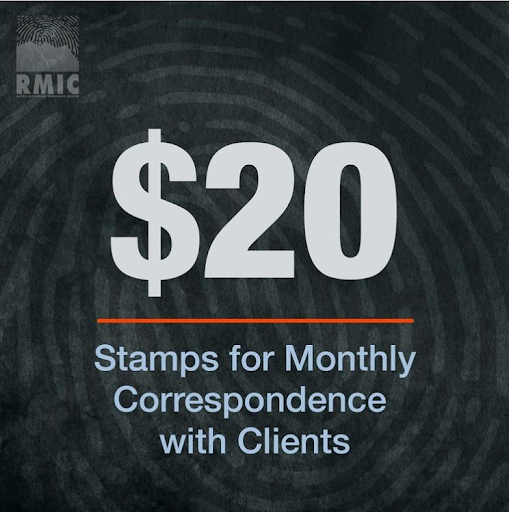 Stamps For Monthly Correspondence With Clients

During the COVID-19 crisis, our mail output has been bigger than ever. Normally we are able to visit our clients, and we make every effort to do so at least once a year. With the health of our clients and other incarcerated individuals on the line, we’ve chosen to halt all prison visits until it is safe. This means an influx of mail. Our clients need to know we’re still out here, fighting for them, even if we can’t see them face-to-face.⠀

Every dollar you send us goes towards the extensive work we put into each case. With 60+ open cases, we work hard to give each case the attention and devotion it deserves. Please go to our website to read about our clients that we have helped exonerate, the legislative work we have done in Utah, Nevada, and Wyoming, or to donate to our cause today. 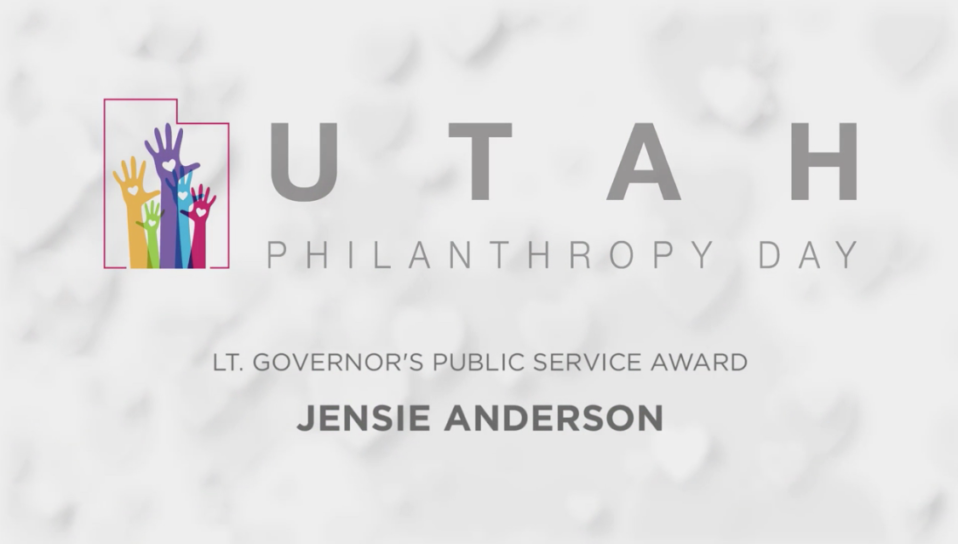 We are pleased to announce that RMIC’s Legal Director and Past President, Jensie L. Anderson is one of the Honorees of Utah Philanthropy Day on November 19, 2019. She will be recognized with the Lt. Governor’s Public Service Award. Ms. Anderson served as RMIC President from 2001-2011 and is currently our Legal Director. She litigates innocence and wrongful conviction claims throughout Utah, Wyoming, and Nevada.

Your ticket for the: Celebrating 15 Years